Many fans called for the mother-of-three to accept defeat after two years of “bullying” Taylor and they want her to apologise. 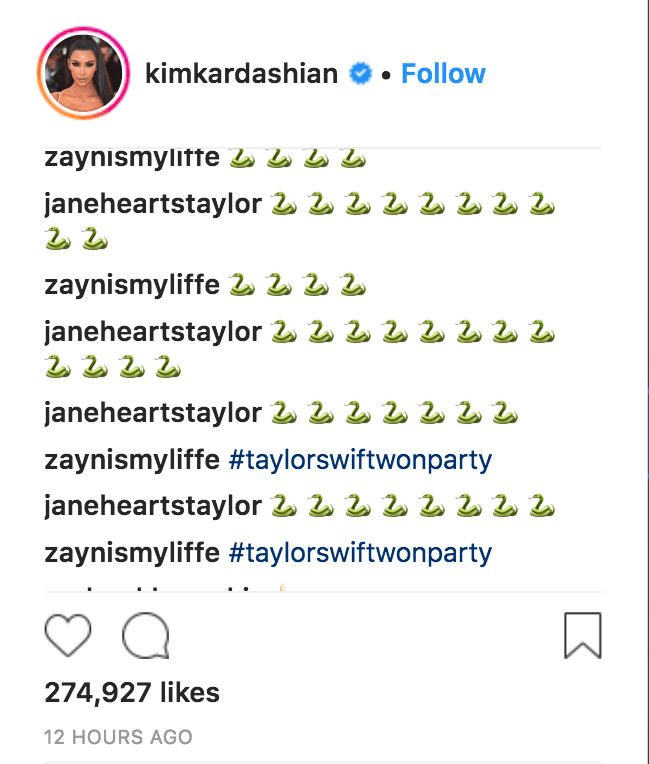 Their feud started in 2009 when Kanye West stormed the stage at the VMAs to take Taylor Swift’s award off her.

The rapper believed that his good friend Beyoncé should have won instead of Taylor.

Kanye later released a song called ‘Famous’ in which he sings, “I think me and Taylor still might have sex, why, because I made that bi*** famous.

He said that Taylor gave him permission to use the lyrics, but Taylor has denied this.

Eventually, Kim Kardashian released a private recording of Kanye and Taylor talking but in the audio Kanye doesn’t ask the singer if he can call her a “bi***” or say he made her famous.

Kim went on to publicly call Taylor a snake on Twitter leading to the singer featuring the creatures throughut her work.

Swift has since released her song, “Look What You Made Me Do,” and covered herself in snakes in the video for the track.

Now Taylor’s legion of loyal fans have called out the KKW Beauty owner.

“#KimApologizeToTaylor you shamed a woman for doing nothing but living her own life and many death threats and online bullying “jokes” ensued,” one person tweeted.

She has been inundated by similar tweets slating her but has yet to respond.

#KimApologizeToTaylor you shamed a woman for doing nothing but living her own life and many death threats and online bullying “jokes” ensued. as a grown woman you should apologize for causing the hate that taylor swift has been receiving from late 2016 to present day.

#KimApologizeToTaylor u lied & tried to tear someone down bc u couldn’t take the heat ur husband was getting for his actions, its been 2 years & some people still believe your lies, u tried to ruin her career even tho your own mother told you to do the mature thing and call her.