Sophia Hutchins has opened up about her relationship with Caitlyn Jenner.

The 22-year-old and Caitlyn have denied claims that they are dating, but the pair moved in together earlier this year and some fans believe that they are engaged.

Sophia has now spoken out about her relationship with the 68-year-old, as she denied that they are romantically involved.

“I wouldn’t describe it as a romantic relationship,” the socialite told Jim Breslo on his Hidden Truth podcast.

“I would describe our relationship as we’re partners, we’re business partners, I’m the executive director of her foundation. You know, we have so much in common,” she continued.

“I think because we share so many of the same passions and views you know, I think it’s just such a great match..a great partnership,” Sophia said.

Although she did confirm that she lives with Caitlyn, the college graduate stated that she doesn’t think that revealing anymore details about their relationship is necessary.

“I don’t think we need to talk about ‘is it romantic or not?’ We’re partners in everything we do, we’re inseparable, we’re business partners. We live together, we share a dog, we share a family, we share a life together.”

“But as far as caving into the media and having one of us as labelling at something, we’re not going to do that,” she said. 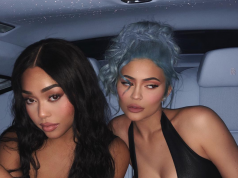