The supermodel travelled to Cox’s Bazar on Wednesday, in her role as Goodwill Ambassador for UNICEF.

Gigi spent the day hearing the stories of those who fled from widespread violence in Mynamar last August.

As the first anniversary of the crisis approaches, over 919,000 Rohingya are now living in makeshift structures in the sprawling camp. These refugees are extremely vulnerable to monsoon weather conditions and other health risks. 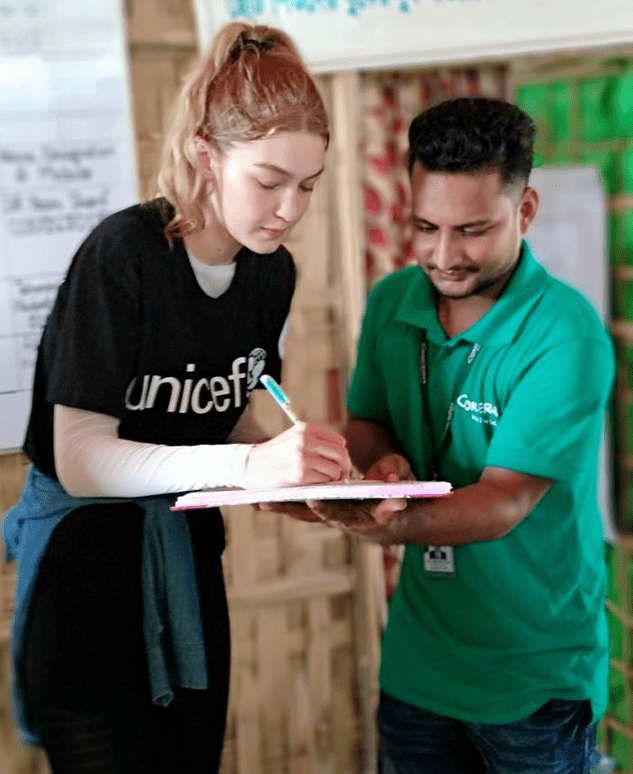 The centres offer life-saving and nutritional support to the children living in the region – and, while there, the model spoke to some mothers about their experiences.

Gigi has been sharing her experiences of the camps on Instagram, to show her followers the conditions these refugees are living in.

In one video uploaded to Instagram, the model plays football with young children living in the camps.

This morning we visited the @UNICEF Child Friendly Space in Camp 9 of the Kutupalong Balukhali Refugee Camp, which sole purpose is to let kids be kids !!! 🙏💫 As well as psychosocial work to help them get through trauma through activities like art, they also can play sports, learn music, and learn to read & draw (some for the first time in their lives). Separate from educational spaces, the importance of these spaces is huge due to the fact that refugee children can spend a majority of the day working, usually collecting fire wood from miles away so their families can cook, taking care of siblings, helping around the house, etc., and here they can just focus on having fun! ☺️ Kutupalong Balukhali Population: 626,500. This is the “MegaCamp,” it has 23 of the 32 camps within it. Link in my bio to learn more 🇧🇩 @unicefusa @unicefbangladesh